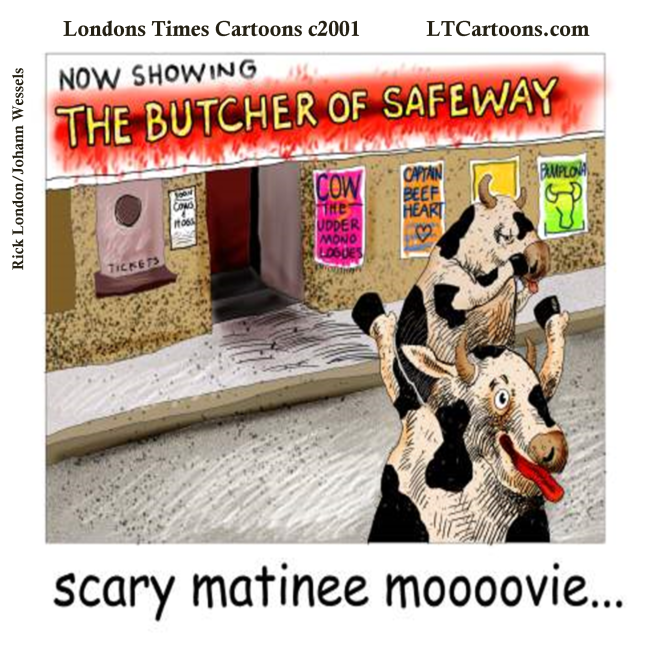 As the years go by, it never ceases to amaze me how much the more things change, the more they remain the same.  The above LTCartoon was created in 2001. Today is the middle of 2015.

In 2001, I was an avid meat eater, and I do not say that proudly.  I either wasn’t ready to quit, I hadn’t evolved to know the importance of quitting, or “screw it” as I always used to like to say. When I whimper like this, its not about you, it’s truly about me.

But no matter what my excuse, and this happened often, my consciousness was still at work, even way back then. It knew better (which is obvious by this cartoon), it simply wasn’t ready to act.

I knew deep down inside this was not something I was supposed to do.  Whether it was by a bit of understanding of karma (2 major heart attacks finally took me down as well as a host of other maladies), before I finally decide to go fully vegan and even then it took dramatic changes in my wife Lee, who started this new lifestyle nearly a year before I did.

Still, I knew and I’m not sure how, that long ago.  I still shake my head and ask myself, “How could you have done that Rick, to yourself and to those animals?”  “You were reading the most current periodicals on animal sciences. You knew cows, pigs, chickens and other farm animal’s consciousness was quite similar to feelings as was their ideas on raising their own families, and lifetime loyalties (often even more so than humans).”

“You (again talking to self), claimed to love animals, and for most my life had dogs and cats and volunteered to help strays etc. and they were pets and farm animals were food.

Everyone is ignorant, including me, before they get wiser, so I can forgive myself for that, but not easily.

Lee and I have talked about it often.  She has similar feelings about it all.  We spent so many years basically ruining our bodies, bringing in a host of toxins from what is now known as “factory farming”, not to mention causing the death to these creatures for our protein, which is so easy to get through plant sources, and now, every bit as tasty if not more so.

Lee not only the one who helped me transition into veganism, but also eventually move all leather products out of the house (we didn’t have any fur products but they’d be gone too if we had).  I still own one item that contains leather, my hiking boots, and the only reason for that is that I bought them when I was still a carnivore, and I’ve not been able to find vegan replacements that work, though am actively looking and plan to before the end of the year.

In most the old farm animal cartoons, like this one, in which I’ve placed cows in awkward situations, the theme has always been bovine vs. butcher. Keep in mind I ate almost nothing but meat and potatoes at the time, but deep down I must have known.

I’d volunteered for years helping farm animals. Maybe that started me thinking about their souls.  It didn’t sink in that they were/are very important souls, but at least the seed was planted.

Over the years of recovering from a lifetime of meat eating, milk drinking, etc., I have decided not to beat myself up too badly, though it still happens at times.  I know I’ve caused pain and damage to many of my animal-friends and their families, and for that it is difficult to come to terms.

But I will.  Meantime, I find myself creating much more “in your face” graphic cartoons regarding the importance of veganism.  I’m being much better to myself. More understanding. More caring. One can hardly offer much care for others without taking care of oneself properly.

Don’t get me wrong.  People evolve at their own pace, and some never do. I know many will always eat meat, drink milk, and think of farm animals as our food and/or source of entertainment..and dogs and cats as pets (as I did for many years..so I certainly cannot be judgmental and am not).

That is them, not me.  The best I can help them realize there are other much healthier alternatives that are every bit as tasty, will help them live much longer and improve their quality of life, and if they care, will reduce their carbon footprint, therefore doing their share to help the planet.

Enjoy. Have a good laugh, and stay healthy.

Many like this particular cow scary mooovie cartoon on various products at my RickLondonGifts.com shop.

To see it on numerous gift items, collectibles, and tees click on “Shop Now”……………..

Rick London is an author, songwriter, cartoonist, and gift designer.  He is best known for launching Londons Times Offbeat Cartoons

When I launched LTCartoons.com in 1997, everything we did was in black and white. We felt newspapers would “make or break us”, and for many years that was true in cartooning. We heard every excuse from “Your cartoons simply are not family-oriented enough” to “Nobody really would understand them…they’re kind of ‘out there’.” Yada yada. I worked with an artist named Richard Larson (no relation to Gary).  Newspapers just wouldn’t touch us. We didn’t take it personally. On any given day there were approximately 100,000 cartoons competing with us (and still are).

On the other hand we were getting amazingly positive feedback from families (even kids of all ages), and on the Internet within a year they were relatively well-known. We finally decided to do color and a t-shirt manufacturer in San Diego paid us $10,000 for the rights to 12 images (by then we were doing color); convinced newspapers were not going to be our bread and butter.

Peanuts creator Charles “Sparky” Schulz advised me that if I was ever to make any money in cartooning, it would not be from newspapers; they merely paid peanuts (no pun intended). He said the real money was in licensed goods, such as Tshirts, mugs, lunch boxes etc.  So that became my focus.  When someone finally created digital design a few years after I launched the cartoon, I spent 15 hours a day learning how to design products digitally.  I have designed about 160.000 products with my mouse and keyboard.  Though it’s not rocket science, it does take a few minor skills to learn. And I’m grateful for those who helped me along with learning that process.

I started researching a bit, and talked to some mentors (other cartoonists who had made it) only to discover newspapers no longer were the holy grail.  The Internet, somehow was going to be the place to showcase ones work.  One simply had to be creative and figure out a way to do so (attractively) and market them properly.

I returned to school at age 47 to learn Internet Technology and Business. This helped a great deal; though most of what I learned is now outdated.  However many of the business principles remain the same and I believe always will.

I started selling signed limited edition prints on Ebay and at the time they did fairly well.  I noticed some of my most popular ones had to do with either a particular animal (such as dogs, cats, mice, chipmunks, snakes, etc). Everybody had a favorite.

Also professions were popular, and, believe it or not, nobody liked lawyer jokes (as much as lawyers).  Well most of them anyway.  They loved to laugh at themselves and many bought their fair share of legal-related cartoons.

So I decided to “outdo” myself with one called “Salad Bar Exam” which is now 14 years old. It remains our trademark cartoon and people seem to like it no matter what their profession (or lack therof).  Also many vegans and vegetarians like it too, as well as dieters who love restaurants with salad bars.  And of course just regular people like you and me who like to laugh.

Many collect my licensed items of “Salad Bar Exam” since they tend to go up in value.  They enjoy items such as Tshirts, mugs, caps, eco-friendly bags, aprons, etc.