Anyone who grew up riding the backwoods of Mississippi for most of his youth and adult life either learns to love cows or hate cows.  I learned to love them.

That was a bit of a dichotomy in that I did not have a high awareness of the animal sciences, so to me cats and dogs were pets and cows were dinner. Little did I know at the time that cows can and do think very much like humans, have similar emotions, are lifelong family animals etc.  The same is true of pigs, sheep, goats etc.  But I’m not here to lecture.  Everyone evolves at their own pace and I am not God’s little policeman to instruct people how they should eat.

People lectured me for 56 years before I listened and even then it was only after seeing Lee on a vegan diet for a year and the dramatic changes in weight, health, spirituality, mood, and just about everything positive. I knew I had to have that, and I also knew the only way I was going to get it was with patience and the proper food and exercise lifestyle.

Al Cowpone is one of my favorite cartoons in all our 4000+ inventory (for some reason) and it was so way before I became a vegan.  I just like seeing cows dressed as gangsters I guess, or cows showing butchers a bit about karma (or cowma in their case).

Though the bovine community indeed thinks and acts a great deal similarly as humans, one thing they’ve not adopted, thankfully from our arsenal of weaponry is violence.  This would of course never happen.  But if they knew how, and ever got angry enough, and knew what was being done to them, I bet they’d at least try.

Cows are wonderful gentle creatures that are not put here for our pleasure, but for their own.  I now know enough about animal research to know that to be true.  Many others know it too; in fact millions worldwide.

When conscious wins over profits, cows will indeed live the lives they were put here to live.  That is to give milk to their own babies, not ours, and wander freely and never eaten. Oh, and they love affection from humans.  Why not try giving one a human name (or dog or cat name) that next time you have the urge to eat one. Pet it and show it some affection.  It makes it much more difficult after you’ve made friends; and they will make friends and follow you around like a dog.  They are very smart and gentle creatures.

Our Al Cowpone gifts and collectibles have become quite popular.  If you’d like…..browse around……………………. 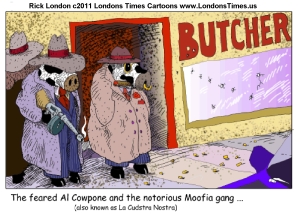