Another year has just about ended, and I feel good, even though I feel bad too (I will explain that in a moment).

Lee and I were watching a Netflix Pixar animated film the other night and I ran straight to bed and didn’t get up until the next day. That was 6 days ago and I’m just starting to feel better. I won’t go into the torrid details, but let’s just say they were mostly “toilet details”. Not so great.

The weather has been cold and damp. And then there’s the tummy ache (not too long after recovering from tooth surgery). I’ve not been able to hike (or even do Tai Chi).

So its during times like this that I slow way down and be grateful. So how do you be grateful? This is not a one size fits all “be grateful” world, I have found. I may be grateful about one thing, that would make someone else bored, and vice versa.

Not long ago, I learned from men and women much wiser than me, that a lot of being grateful is taking action doing what I love doing. For many, I know, that is easier said than done. Many my age, or older, or younger, have never “done” what they love to do, and have acquiesced to the fact that it “ain’t gonna happen”. Either a well-meaning parent forced them to major in business when they were more cut out for creative writing, Maybe they set up their own obstacles. Maybe they looked at peers who were “already legends” and said to themselves “no way”. There are a million excuses and I bet I’ve used 999,999,999 of them. What’s my excuse for not using a million? I couldn’t think of the last one. 🙂

But doing what one loves to do does not necessarily mean “your career”, though of course its nice(r) if that be the case. Kafka was an insurance clerk while he authored his books. In other words if one starts where they are, rather than trying to conquer the world the first week, month or even year (though it could happen), and stop worrying about what others think of “their new hobby” or whatever one wants to call what he/she is learning, then one is well on the right path.

If there is not enough information on the Internet on how to launch and run whatever venture in mind, there are always Internet classes (or local college classes); I took Internet classes at a real accredited four-year college and was very pleased with how pragmatic the education was. That was not the case in my earlier years of college at state universities. It was not all their fault. I was a late-bloomer; after years of being a blooming idiot.

Can’t afford college? There are plenty of grants, scholarships and loans for adults returning. That’s how I did it. But academia is not for everyone. There’s mentorships. A lot of well-trained professionals will take you on if your story is convincing and you only ask for a little of their time.

Most books in libraries are now online, and there are plenty of used books for pennies on the dollar at Amazon and other online bookstores.

Our generation was flooded with clichés’ which meant well, but didn’t tell the whole story. “Just say no” and “Just do it” were but a few. Both were easy to repeat, but for many they were not so many upon which to take action.

I think they should have been written more like, “Just say no to drugs, alcohol and/or promiscuous sex. It will not always be easy. There will almost always be peer pressure and the need to fit in. This is only a temporary situation. In the long run, if you say “No” to these powerful negative forces which can impact your life forever, you will be forever grateful and happy that you “Just Said No”. I think kids and even adults could much more have easily understood those steps.

I would have written Nike’s “Just Do It” to “Just Do It A Step At A Time. Don’t jump into anything without knowing what it is. If you are planning to run, don’t run a marathon the first day. Learn how to train for a marathon first. If you are starting a business, learn a bit about it. Don’t worry about the results. In fact don’t worry about anything. Just do what you have learned and if that doesn’t work, learn another way to do it. The information is out there. And now with the Internet, it is out there at the click of a mouse. If you “Just Do It”, you’ll be happy doing it. But if you’re always focused on the finished line, you’ll forever be sad”. Of course Nike would never be able to fit that into an ad, nor would the ad be feasible.

I ran two marathons in the late 1970’s. On the 1st one, I was focused on the finish line. I barely finished. It took 4.5 hours and over 2 months to fully recover. The next year I trained the same way, focused on the scenery and other runners and had fun, finished in a little less than four hours, and less than a week to recover.

I find the same is true of anything in life. And if you can do whatever it is you want to do with a friend, its that much more fun. I am fortunate that my wife Lee Hiller is my best friend and I love her dearly. Though are businesses are not identical, much of the way we create our products and market them are the same. We are both nature/wildlife lovers so we both have yet more fun while she’s working in the forest (with her camera) and I’m running around like a kid chasing animals. We teach and learn from each other on a lot of topics.

Today there’s a new breed of snake-oil salespersons known as “life coaches”.  They charge anywhere from several hundred to thousands for their videos, audios and ebooks, claiming to have “the answer to life”. Trust me.  They don’t.   They generally steal, edit, and regurgitate great quotes from the early literary and philosophical masters and take credit.  Some are so brazen, they don’t even edit and still take credit. In any case Wordsworth negated everything they do before they even existed with his famous quote, “To begin, begin”.  It’s really no more complicated than that, and don’t let anyone tell you it is. It’s simply NOT.

If “doing what you love” at mid-life can happen to us at mid-life, it can and will happen to you. Simply start where you are and “Just do it…but remember….first you…etc etc then you etc etc” 🙂 and enjoy! The best is yet to come. 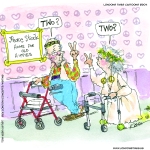 I’m a goofy vegan mountain man trying to do the right thing and occasionally I hit the mark; more often I don’t.  I love my wife nature/wildlife photographer Lee Hiller London who  creates the blog Hike Our Planet.  I enjoy cartoons, and founded Londons Times Offbeat Cartoons & Funny Gifts which have been Google’s #1 ranked on the Internet since 2005. I like to design clothing and shoes and do so at Wisdom Shop which has gifts with famous wisdom quotes and Shoes That Amuse, which has shoes and gifts with famous love quotes.  Oh, and I recently opened a shop with a lot of famous caricature cartoon gifts and clothes called The Rick London Fame Shop.  If you shop with me, happy shopping.  Every one of our 1/4 million items are vegan-friendly and come with a 100% 30 day money back guarantee.