Like most, I remember in 2007 how saddened I was by the Va. Tech shootings. I had remembered watching the news, and that the police had been confused as to exactly where it was occurring.  I was (back in college) as a nontraditional adult student at age 50 and recovering from a heart attack.

Fortunately, a friend was there at the time (during my heart attack) who drove me to the hospital. I wondered what would have happened otherwise. Given those major events, and my new knowledge of basic software design, I invented a fully-automated computerized med-alert system that is worn as a watch or other jewelry.

I took it out into the marketplace and found a few investors and a software engineer firm.  I was able to speak the lingo via a former IBM software engineer who looked carefully at the powerpoint and saw immediately it could work, but would be pricey (and bulky).

Each weekly report from the software engineer designing the prototype revealed that the cost just to build the prototype would be prohibitive, and even if I could succeed in raising enough funds to finish it, very few of the public would be able to afford it.

My hopes were it would not just be for civilians, but for military as well. So many casualties happen in war when soldiers get lost or accidentally abandoned. The military would not be able to afford it either.

At the time Bluetooth was not the most reliable software.  My IBM friend recommended a large chip (actually it was 3 chips that allowed 3 different softwares to speak to each other); and that chip made Insert Alert a bit heavy and very expensive.  Bluetooth may be more reliable today. I don’t know enough about it to make that statement for certain.  It might (or might not be the most economical). 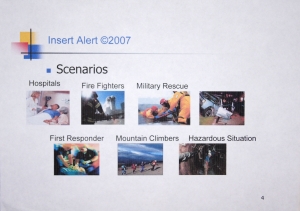 Eventually I abandoned the project.  Today on facebook a friend brought up the W. Va shooting and it reminded me of the time I tried to create the world’s first/only computerized medical alert product (one in which the wearer could be unconscious or even underwater); it auto-dialed 9-11 with exact location, the type of emergency, vital sign info and person’s name and address. It alsosends a  text his/her loved ones with similar info.

Here is part of the power-point presentation that was on our website.  The site and corporation has dissolved, but if the right investors/venture capitalists see it and want to give it a shot, I am willing to start it back again.  Thanks.