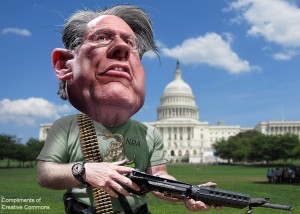 Before the NRA was founded America had guns.  We never worried about our 2nd Amendment rights, because like our other rights, they were and are clearly written in the Constitution. All common usage guns are protected.   When the NRA was founded, they were on the side of gun-owners, even teaching gun safety classes (one of which I took and most enjoyed).

In the early 1990s, things changed. Suddenly we were told our 2nd Amendment rights were at risk.  How could this be. America was fine for 300 years before the founding of the NRAand suddenly the 2nd Amendment was in trouble?  Who was telling us this?  It turned out the NRA was telling us this.   The smart Americans began to easily understand they were lobbying, no longer for gun owners, but for gun manufacturers (and sellers).   The end-buyer was to be the fearful chess pawn who would buy more guns due to the big bad monster under the bed who swallows guns.

LaPierre, admittedly did his job so well, that on 12/14, when 20 children were brutally mowed down to the size of molecules, Americans all over were holding tight to their guns, wondering if this was the last straw; not even thinking of the families and their horrendous losses.   He not only has brainwashed them, he has made them extremely ill.  Children are more important than Bushmasters.  I know that’s hard to believe for some, but its really true.

Every country which has had horrendous civil wars have had their own version of  Wayne LaPierre; Syria, the former Libya and Iraq and the list goes on and on.

The chess game is not rocket science. It’s simple unscrupulous business. The gun lobby pays (and grades) the political system of each country, tells them how to vote and often writes their states laws.   They then instill fear in the end user (gun owners) that they need more guns as bad people with even more guns are after their guns.   And every time they buy into it.

I so hoped Americans were smarter than that. Fortunately most are (yes even NRA members) who joined it in the nostalgic times when it was honest and provided a decent service.

So what happens when inevitably a civil war breaks out in each of the countries (which it does)?  The Wayne LaPierre’s of the world leave those countries right at the outbreak of the wars sipping drinks with umbrellas on Polynesian beaches laughing loudly at all the puppets they manipulated to become billionaires.

Rick London is a writer, designer and cartoonist. He founded Londons Times Offbeat Cartoons & Funny Gifts which have been Google’s #1 ranked since 2005.

7 thoughts on “Is Wayne LaPierre Pulling Your Strings? by Rick London”