At what age do adults realize that not every other adult has the same childhood memories that you or I do?

I was talking to my favorite Aunt Jane on the phone the other day as I do almost weekly, and she was telling me about my cousin, her grandson at age five, and all the whacky shenanigans.  He will be starting 1st grade a bit late due to some hyperactivity issues, which I’m sure I had as a toddler, along with a zillion other non-diagnosed, or misdiagnosed childhood issues.

I chuckled when Jane told me how Max (my little cousin age 5 said) to her, “The doctor is a good one but he can be so irritating”.

I reminded her that (and I remember this), when I was age 3-4, living in a small white frame house on S. 28th Ave which later became AAA Ambulance Service behind the Ms. Highway Patrol building in Hattiesburg, Ms…yes the same Hattiesburg that recently was hit by a monster tornado and is the real birthplace of Rock & Roll (according to Rolling Stone Magazine).

I had a girlfriend, also age 3 named Sharmain Sharp.  I pronounced all my “S’s” as an “H”.  Not only that, but my favorite thing in the world to do was “Sit on the sofa with Sharmain Sharp”; so of course it came out, “Mommy Daddy, I’d like to hit on the hofa with Harmaine Harp”.  Within a few days I was off to one of my many speech therapy sessions in Jackson, Ms. (Hattiesburg didn’t have one then).

As soon as they fixed that ailment, another one cropped up, then another, and another.  There were so many (I clearly remember now), my parents must have decided on “acceptance”.   There were no more doctors for childhood disorders.  I was fortunate enough to bring several of them into adulthood with me; some that are quite cute as a toddler, and particularly scary as an adult.  Oh well.

As I was describing this to my Aunt Jane, for sure she had heard about it or remembered it, nada.  She laughed as if it was the first time she’d heard of it, and perhaps it was. I should not be so self-absorbed.  As well as I know Jane, and I know her well, I only know a few of her childhood tales.  But I thought everyone knew of my speech impediment and Sharmain….and the sofa.

One of my most visible ones to me, was a vertical form of dyslexia that I pointed out to the special dyslexia school in Washington, D.C. who noticed it immediately.  At the time, I was working on a story as a producer for the show “Entertainment Tonight”, and Cher and Tom Cruise were visiting to talk to the kids. Both actors had dyslexia and overcame it.

I never completed an entire book until I was 29 years old. I remember buying it at Winn Dixie…”Being There” by Jerzy Kosinski.  Oddly, I would later meet him in NYC.  I explained the story to him and he seem pleased.  It turned out to be one of my favorite films as well.

Though I already was keenly aware of the disability, when I returned home to Ms. I decided to be tested at their lab.  They found no signs of any reading disorder. I thanked them and left…and struggled with the disorder for another two decades; though much less so than I had as a child. The school in Washington taught me to be patient, take a breath and wait for the words to return. Also, if not too difficult, to hide all but one line with a piece of paper or cardboard. I tried that awhile and it was helpful.

Then about 2 years ago my beloved wife Lee Hiller-London had an idea.  It was getting near my birthday and she knew my love of the “arts and letters”.  She had a theory that a Kindle Fire might solve the problem as the letters are large and not attached to paper on glass with a gray background. She was buying one for herself and decided it might help me.

She was right on target.  I have read more books in less than two years on the Kindle Fire than probably (added up) all the books I’ve read in my lifetime.  More importantly, in most cases, I understood the text.  I’m not saying this will work for everyone, and there are still times the dyslexia returns but only briefly, and I get through the book. I remain a slow reader but I love the reading and learning process.

I was able to return to college at age 47 and study (mostly online) getting help from colleagues (who knew my situation and cared) and taught me a great deal about business and the Internet. 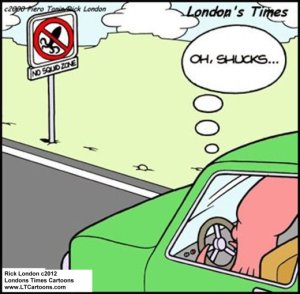 At that time my cartoons, Londons Times, were still a hobby.  I was only doing something to bide my time after a major heart attack until my life (sad to say) would be over.

Little did I know within a year I’d start launching stores with my licensed cartoon images, and start designing giftware and clothing that had nothing to do with cartooning.

Life is funny that way.  What was the proper combination to make it all happen?  I don’t believe this is a one-size-fits-all-world and nearly everyone I know has learned to live their dream differently

For me, it was a mix of a little faith, meeting the woman of my dreams (Lee) who believes in me, finding people smarter than me to work with me to make things happen, hard consistent/persistent work even when one does not feel like it, and taking time  away from it to play.

Lee and I play by hiking in our National Forest and taking photographs.  That is not for everyone but I do believe that Nature offers a type healing that can’t be found in too many (if any) other places.

Rick London is a writer/cartoonist and designer.  He founded Londons Times Cartoons in an abandoned tin shed in Hattiesburg in 1997 which has become Google’s #1 ranked Offbeat Cartoons & Funny Gifts since 2005.  He is married to popular nature photographer Lee Hiller-London who runs the popular nature blog Hike Our Planet.