If you have been in a political debate or have seen something political either on facebook (or in real life) of which you disagree, and you think less of that person for posting or saying it, I suggest long-term therapy (and this time I’m not being funny).

All of us are much more than our petty political viewpoints….that is just a very tiny part of us. Never ever just become your political point of view, because once you do, you’ve lost yourself in a horrid way. Human beings are of the greatest value. A sign of maturity is differing in POV, yet still thinking highly of the other person as one of God’s children. It doesn’t matter if you are Democrat or Republican. It’s the same disease when we close our minds to opposing points of view. We don’t have to like their point of view.  We don’t even have to come close to agreeing.
It is legal to entertain a new idea, without accepting it.

Think about how you were from birth to age 5 or so. Politics was not even in the picture.  All the possibilities of this great big mysterious world were abound.  If you grew up, and you left all that to become “your political idealism”, think how very, very sad that is. I’m not saying it is not okay to have a political view; it is in fact healthy.  But just keep it in perspective.  Know that when you post it on facebook or twitter, it truly is for your own entertainment.

It is not going to change anyone’s mind; in fact studies show, it usually has the opposite effect (but admittedly it can be fun, as long as one does not become obsessed with it).

Like religion and spirituality, it should be “walked and lived” but when it becomes preached or coerced, it tends to lose its value (or people tend to take us a bit less seriously).

To occasionally watch network news stations with which you disagree shows true maturity and a need/want to open the mind and learn more. To not do so is to stagnate the mind in a most pitiful way. And I don’t say that out of spite or with glee. I learned that from interviews with nearly 50 nursing home residents in 1996-1997  with my question, “What would you have done differently in your life…if anything?” The answers were solid gold and most were happy to answer. 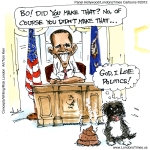 Their answers,were of such value I could never repay even if I tried three lifetimes.  Most would not have wasted time in silly petty political or social issue disagreement.  They simply

would have walked their own walk; leaving others alone to walk there’s; and not only tolerating an opposite walk, but applauding it.  Now that’s wisdom.

Several said they would have not been coerced or try to coerce others into believing or thinking as they did (in other words walk the walk of “living and let live”) and so much more; enough to loosen the cobwebs to launch LTCartoons.com on March 19, 1997. I can never repay the residents of Hattiesburg Nursing Home, most of them 70+ who taught me life, real life, before it was too late.

Though my reason for visiting the nursing home, at first, was to visit my beloved grandmother Ruth “Dear” London.  Many of the residents were quite lucid and great conversationalists.  I thought I might volunteer and offer some of my time, and be a good listener.

Just imagine my surprise when they ended up giving me more than I could have ever given them.

Rick London is a freelance writer, author, musician/songwriter, cartoonist, designer and founder of Google’s #1 ranked offbeat cartoons & funny gifts Londons Times.  He is married to popular nature photographer Lee Hiller-London who owns the popular nature photography blog Hike Our Planet.  Together they live in and love the Ouachita Mountains of Arkansas and are active in animal, green, children, and ecology causes.

2 thoughts on “Politics & Psychiatry. When To Debate When To Get Therapy by Rick London”